“Many of life’s failures are people who did not realize how close they were to success when they gave up.”

Indeed, I’ve seen many many smart, hardworking and capable people failed to achieve anything just because they decided to give up instead of hanging on.

If you’re a professional tennis player (of course, 99% of you are not), and if you have a chance to reach the final of Wimbledon (99.9999% of you will not), then you will see an inscrption above the entryway, before you enter the Center Court:

These two lines are extracted from Rudyard Kipling’s poem “If”; but in fact, the other few verses of the same poem pretty much described the same thing about hanging on:

If you can force your heart and nerve and sinew
To serve your turn long after they are gone,
And so hold on when there is nothing in you
Except the Will which says to them: “Hold on”

So, if you’ve been fed up with everything you see, got tired by the work day after day, felt hopeless after countless trying, or no one is willing to give you a hand … think again, and tell yourself “Don’t give up, never ever give up.”.

Don’t give up, because you know you can adapt to this crude world, because you will be full of power again the very next day, because you can make a dent to the universe one day and because someone around you will eventually help.

Hold on to what you believe; and hang on to your dream.
It’s never over, unless you give up.

About 10 days ago, Amazon announced a new version of Kindle 3 – the same look, the same specification but US$ 25 cheaper (i.e. the new low price is US$ 114). But there is one catch – you can buy one at this low price as long as you allow Amazon to place “Special Offers” (read “Ad”) on to your Kindle.

When I scanned this news, several questions popped up in my mind …

I have no good answers … but looks like at this price point, every book lover shall get one.

According to the Hynek’s scale, first encounter is an event about sighting one or more unidentified flying objects (UFOs). And in my case, I encountered an unidentified computing objects (UCOs, i.e. computers) 30 years ago and it’s unidentified because those computers are housed in a large room, behind a thick wall and we could use it only through an “operator window” and with a deck of punch-cards.

Then for the second encounter – it’s an observation of UFOs, associated with physical effects like heat, interference with TV / radio reception and lost time. So obviously, my second encounter of computers were the desktop (in mid 1980s) and laptop computers (early 1990s). I could feel the heats, noises generated from the computers and of course I lost thousands of hours with these devices.

So, what’s the latest aliens ? It’s the iPad 2 … thinner, lighter, faster, last longer than the original iPad, and it even come in white color. But how is it compare to Kindle as a reading device ? In my view, iPad 2 is the best all-purpose tablet device in the market. It is so good that you will spend all the time (i.e. lost more hours) with the wonderful apps from the iTunes store, and therefore … you won’t spend quality time at all to READ.

So … for book reading, go for Kindle, no matter you like to read it under bright sun or not. 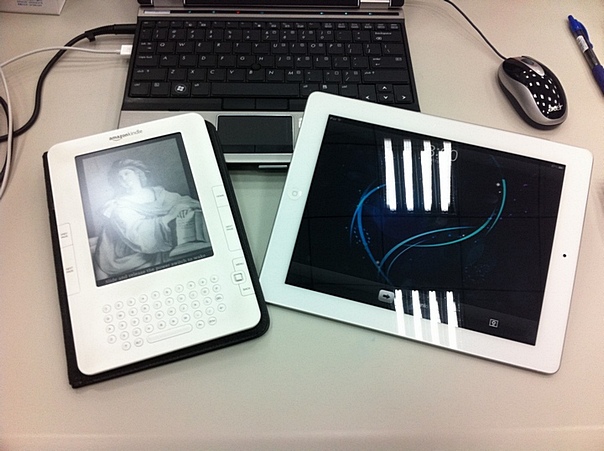